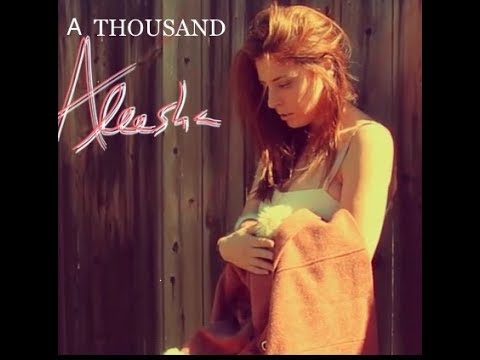 Aleesha is a singer and songwriter with a clear and powerful voice, never heard of her before, but surely a big surprise.
She just presented her new single “A Thousand”, a very tasty kind of pop, a little tending to mainstream sonorities, but never getting cheesy, and very, very pleasant to listen to.
Enjoy the track and don’t miss the release blurb.

I wrote this song a little while ago and only now sought this through. Authentically I spent this whole year doing exactly what I wrote about and somehow these clips of my life seemed to fall together perfectly to make not only an auditory song but a creative visual as well.”

Aleesha’s new single “A Thousand” was written in collaboration with songwriter/producer Peter Roberts.

The song is filled with metaphors and action packed lyrics that send out messages to all those in pursuit of adventure and freedom. Aleesha’s penmanship originated by her need to explore and live life in the moment instead of keeping her feet grounded to a relationship.

Aleesha reveals that lessons are only gained by new experiences and she exemplifies that through her imagery and traveling videography. Aleesha states, “this song is all about the importance of slowing down the pace of life, getting out of that office to explore, and seizing all that we are scared to try. Besides self-reflection, looking back is not that productive.”

Aleesha and Peter Roberts both have many credits to their name ; having many songs placed in television shows, movies, and video games. Credits include “Damages,” “Bold & the Beautiful,” ABC family’s “Greek,” “Switched at Birth,” Lifetime’s, “I hate Valentine’s Day,” and “Speed Dating,” as well as “Necessary Roughness,” CW’s “Smallville,” “Plain Jane,” and “High Society,” just to name a few. Aleesha has opened for Snoop Dog, John Legend, Pitbull, Sting, and many other amazing artists. Whether it’s songwriting, singing, or traveling, Aleesha continues explore all facets of creativity and inspiration.